Posted By Baptist Missions Shankill Team, On 31/10/2014
Conversion
on the Shankill
Moving from a rented unit in a Business Centre in a side
street to a refurbished building with frontage on the main Shankill Road was a great occasion for
the Shankill Community Fellowship. On 25th October the ground floor room, which
will house the Drop-in Centre and other weekday activities was packed as 11am
drew nearer; then Derek Baxter (Baptist Missions Associate) welcomed those
present but immediately asked them to vacate the building as the official
opening would take place in the adjoining street.
Well over 100 people, Shankill residents and visitors from
other churches, assembled in Malvern Street Derek Baxter welcomed them to the
Opening Ceremony.  He thanked Gary Harpur
(Architect) and Robert Greer (Builder) who had transformed the Centre and used
his alliterative skills to say they had turned a bunker into a bright and
beautiful building.
Sharon Wilson (Baptist Missions Associate) read from Romans
10 and Ian Moore (Baptist Missions Shankill team member) led in prayer.  Kim Kelly, the first Baptist Missions Worker
on the Shankill Road then led the
children’s choir in the singing of “God is so good” and “This little light of
mine”.
Derek Baxter then preached from Psalm 57:2 and started with
the assertion “We believe in God most High” in contrast to those who refer to
Him in such terms as “the man above”.  He
referred to Him as a God who listens, a God who acts and a God who cares.  The Psalmist knew that God cared for him and
Derek stressed that the new building, a place of sin transformed into a place
of salvation, was open for all to come to a place where they would be cared
for.
He then asked Kim Kelly to share her thoughts on the
day.  Kim described it as a Special Day;
she was quite overwhelmed by what God had done and grateful to the architect
and builder and also to many many people who were present or had sent good
wishes. Like everyone who lived in the area she had heard stories about the
building’s past but looked forward to greater stories about its future. God,
who was already active in the Community Kim loved so well, would work in the
Centre as he had worked in the past.  Her
prayer was that people would come into the Centre and then go out again ready
to tell others about what Jesus had done.

Kim then introduced Mrs Marie Foreman, principal of Malvern Primary School, who started by
acknowledging the great honour she felt at being asked to take part.  The Centre was the result of much prayer and
preparation and she exhorted the team to be encouraged, leaving a verse – 1 Cor
15:58 [Therefore, my dear
brothers and sisters, stand firm. Let nothing move you. Always give yourselves
fully to the work of the Lord, because you know that your labour in the Lord is
not in vain].  Mrs Foreman then cut the
ribbon and declared the Centre open.
Brian
Dorman (Former Baptist Missions worker, now retired) greeted all who had come
and expressed his own delight at being there before closing in prayer and
giving thanks for the food.  All were then
invited to come back into the Centre and go upstairs where the room which would
be used for Sunday services was filled by chairs and a table spread with all
manner of refreshments.
After a
lengthy and relaxing lunch break those who were able to stay and a number who
had just arrived made their way across the Shankill
Road to Shankill Leisure Centre for a Praise Service attended
by over 200.  The Children’s Choir sang
again and two soloists, Jim Weir and Amy Roberts took part.  The speaker, in keeping with the team’s wish
to involve the whole community, was Mr Sam Moreland of the Malvern Assembly.
Greetings were brought by Pastor W. Colville representing the Association &
the Directors of The Northern Baptist Corp, Mervyn Scott (Baptist Missions),
Pastor Neal Gordon ( Shankill Baptist) & Walter Mc Bride representing the
wider community.
The
weekend concluded on Sunday morning with the opening service in the new
building, conducted by Ian Grant, Pastor of the Armagh Church.

THE PHOTOS TELL THE STORY!! 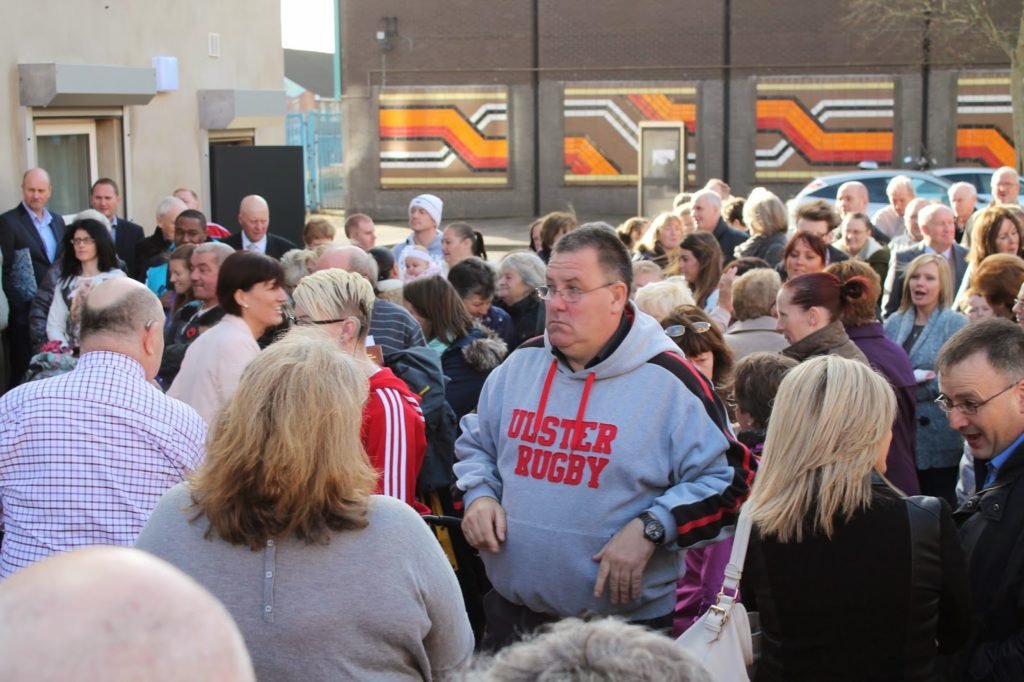 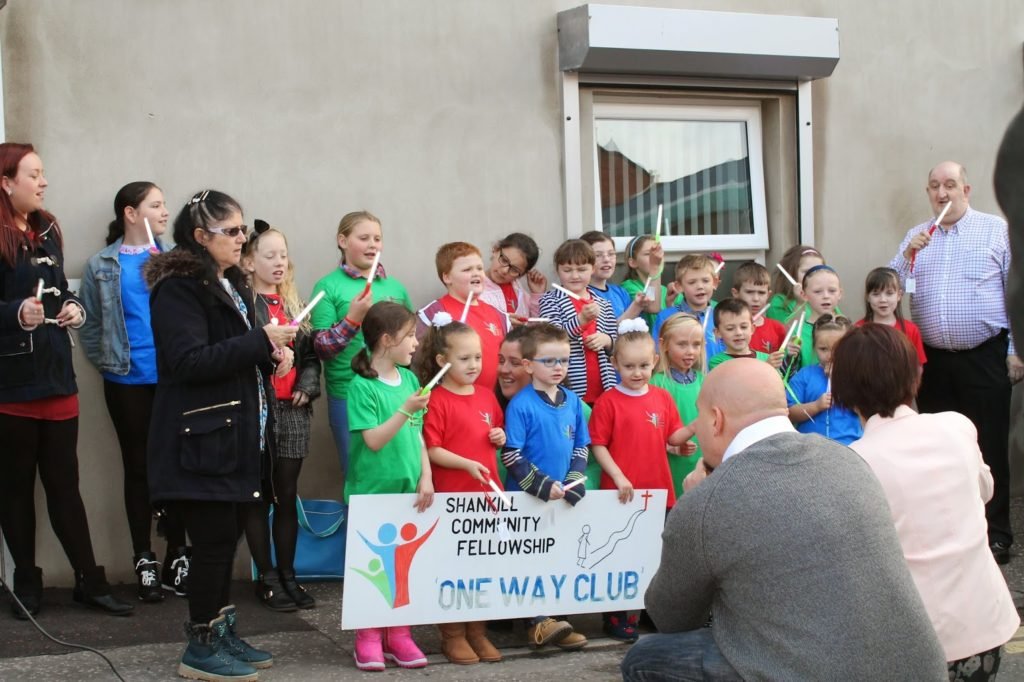 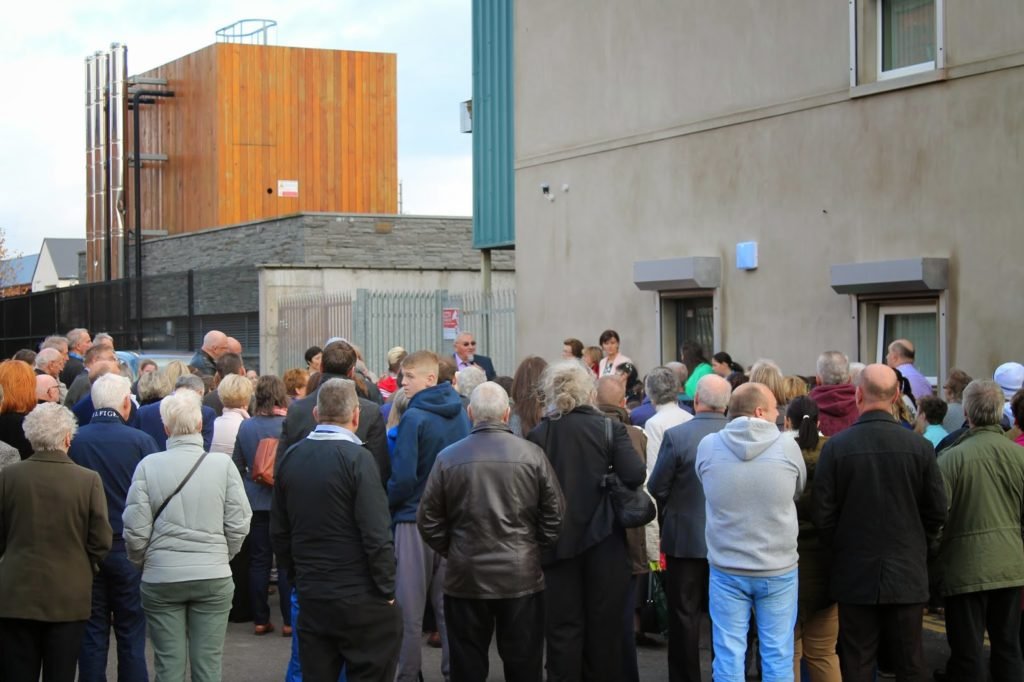 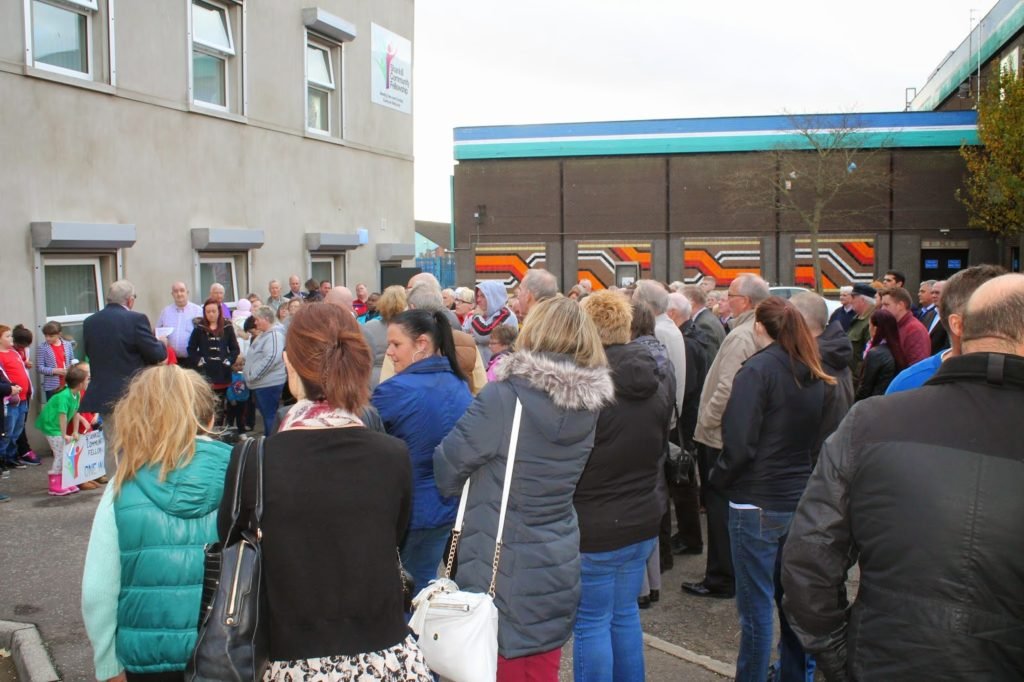 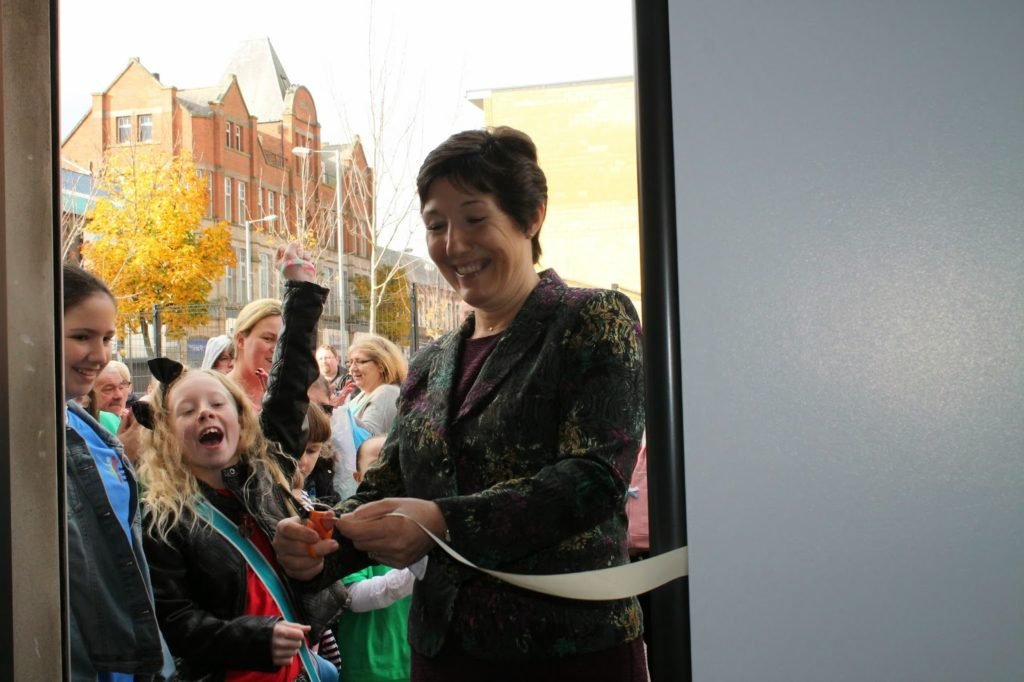 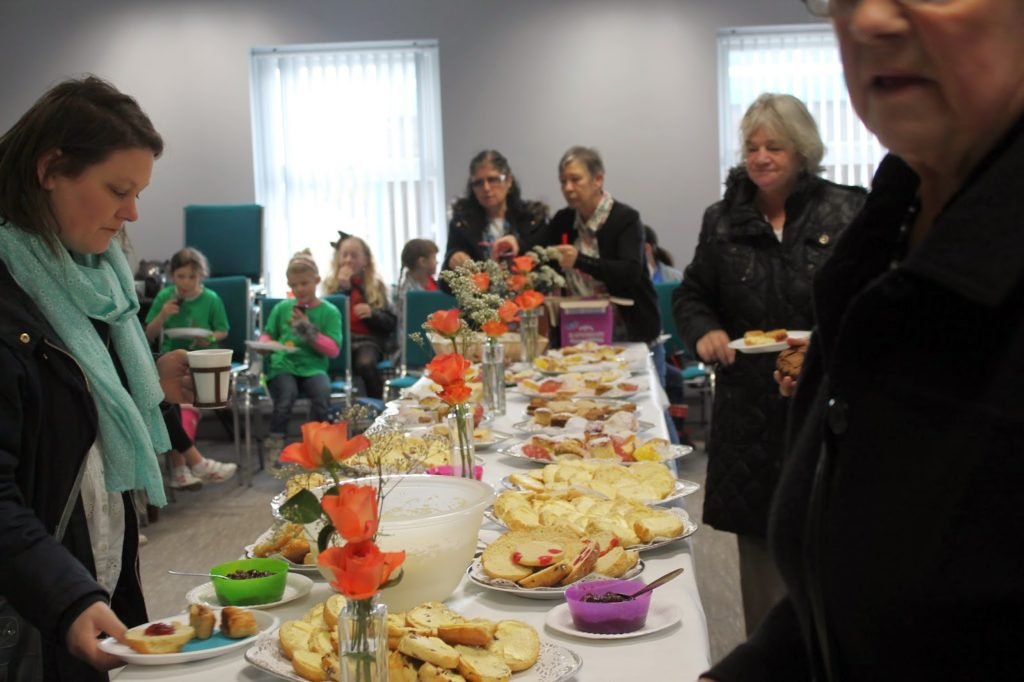 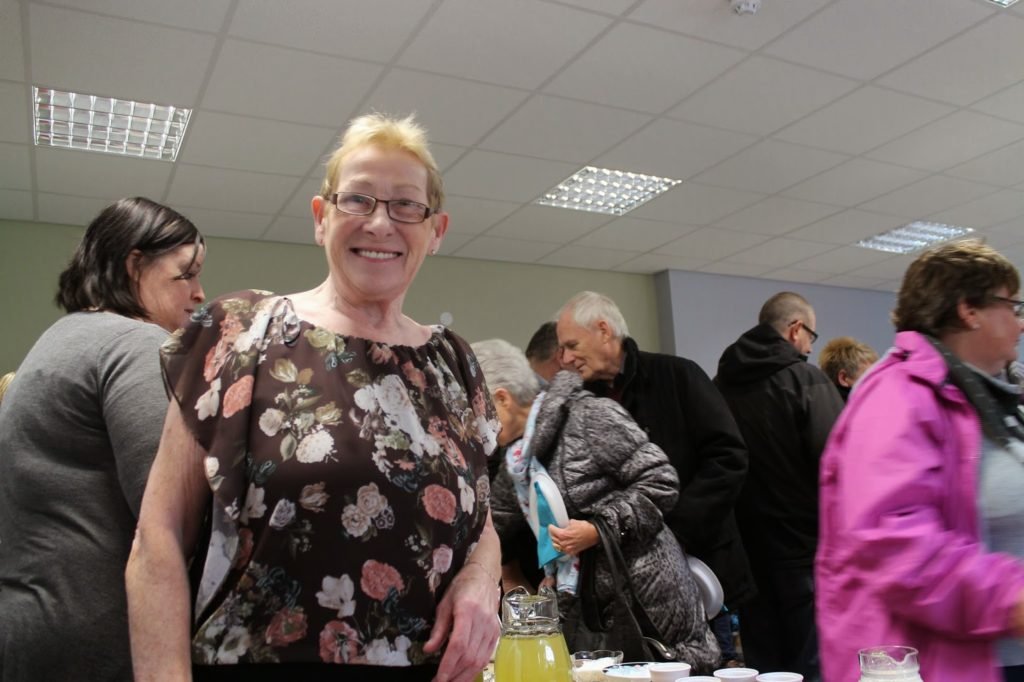 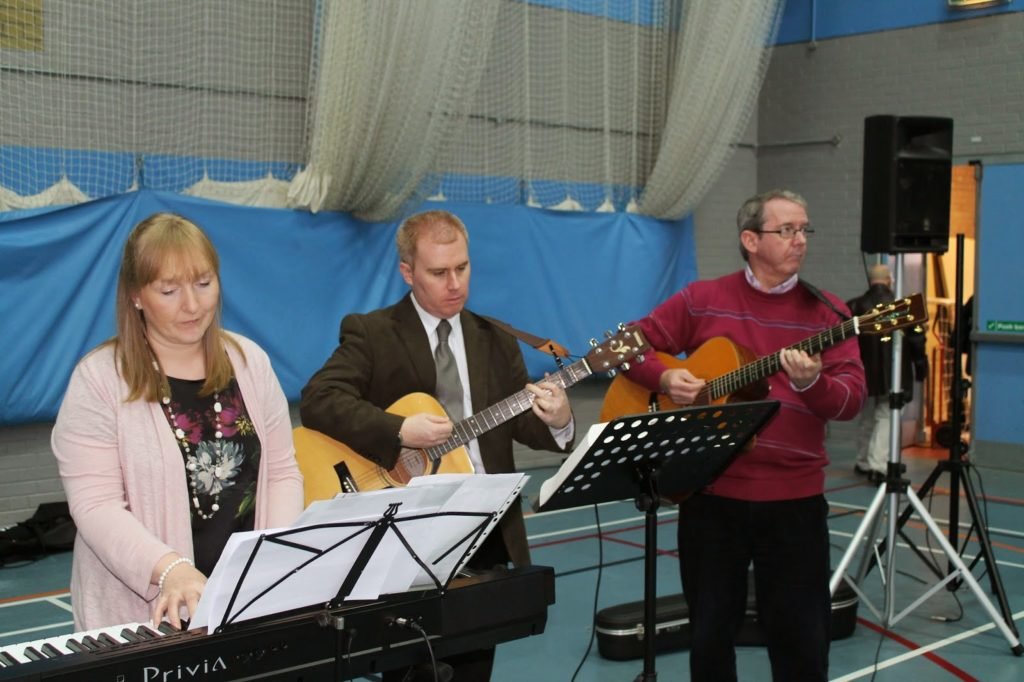 OUR THANKS TO ALL WHO ATTENDED & THOSE WHO PRAYED & GAVE TO THIS PROJECT!!

THANKS MOST OF ALL TO GOD – WHO HAS DONE MORE THAN WE ASKED OR THOUGHT!!

This site uses Akismet to reduce spam. Learn how your comment data is processed.